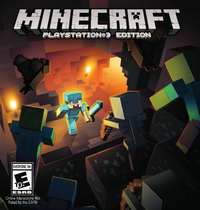 On April 16, 2014, Sony announced the retail disc version of Minecraft PlayStation 3 Edition, which was released on May 14, 2014 in Europe and on May 16, 2014 in North America. The game otherwise is identical to the downloadable version. Features such as buying or downloading content on the PlayStation Network are the same for both versions and they both update at the same time.[6][7]

As with the Xbox 360 and the Xbox One trailer, this one was also created by Hat Films.[8]