A piston is a block capable of pushing blocks, players, and mobs when given a redstone pulse.

A sticky piston has the same function as a piston but can also pull the block on its face back when it retracts, unlike the regular piston, which leaves the pushed block in place.

A piston can be broken using any tool with equal efficiency, and always drops itself. Πρότυπο:IN, it is faster to break them with a pickaxe, although the Efficiency enchantment does not increase the mining speed.[Verify] The pickaxe is the preferred tool for the head also, despite it being made almost completely of wood.[1]

Three sticky pistons generate as part of each jungle temple.

Pistons are always placed facing toward the player. When powered, the piston's wooden surface (the "head") starts extending immediately Πρότυπο:In; or either Πρότυπο:Convert later or immediately, depending on how it was powered, Πρότυπο:In. When it extends, it pushes at most 12 blocks. The piston makes a sound that can be heard within a 31×31×31 cube centered on the activating piston. Any entities in the path of the extending head are pushed with the blocks. If there is no place for the entities to go, the block pushes inside them, suffocating mobs if the block is not transparent when pushed into the eye height of the mob.

When a piston loses power, its head retracts. Like extending, this retraction starts immediately Πρότυπο:In; or, depending on how it was powered, after 1 tick Πρότυπο:In. It finishes retracting Πρότυπο:Convert after it starts. A sticky piston also pulls the block attached to its head, but not any of the other blocks it may have pushed.

Sticky pistons stick to a block only when retracting, so a block next to the piston head can be pushed aside by another piston and sticky pistons cannot hold falling blocks horizontally against gravity. Πρότυπο:IN, pistons finish extending early and start retracting if given a pulse shorter than Πρότυπο:Convert. These shorter pulses cause sticky pistons to "drop" their block, leaving it behind when trying to push it with a short pulse. Also, this causes the block to end up in its final position earlier.

A piston that pushes a slime block bounces any entity that it displaces in the direction the piston is facing. In addition, when a slime block is moved by a piston, any movable blocks adjacent (not diagonally) to the slime block also moves. See the "Slime blocks" section below for more details.

Πρότυπο:IN, blocks that stick to walls (such as levers) can be placed on pistons or sticky pistons.

Pistons cannot push blocks into the void or beyond the top of the map. They also cannot push more than 12 blocks. If the requirements for a block to be pushed are not met, the piston simply does not extend.

Pistons do not move blocks that are "attached to a block", as they detach and drop as an item.

Pistons can be powered in various ways:

When a slime block is pushed or pulled by a piston, while moving, adjacent blocks also move with the slime block, unless a non-piston movable block stops the blocks that are "grabbed" by the slime blocks. These blocks may in turn push other blocks, not just the blocks in the line in front of the piston. For example, a slime block sitting on the ground attempts to move the ground block underneath itself, which in turn has to push additional ground blocks in the direction of motion just as if it were being pushed directly by a piston.

Glazed terracotta is an exception; it does not move when adjacent slime blocks are moved.

The same occurs when a slime block is moved by an adjacent Slime Block. For example, a 2×2×2 cube of Slime Blocks may be pushed or pulled as a unit by a single piston acting on any of the blocks in the cube.

Slime blocks are not pulled by a non-sticky piston, nor are they moved if an adjacent (non-Slime) block is moved by a piston.

The maximum of 12 blocks moved by a piston still applies. For example, a 2×2×3 collection of Slime Blocks may be pushed or pulled by a sticky piston as long as no other movable blocks are adjacent to it.

A piston cannot move itself via a "hook" constructed of slime blocks, but self-propelled contraptions can be created with multiple pistons. For that, see the article Tutorials/Flying machines.

The same happens for the honey block, but it does not stick to slime blocks. 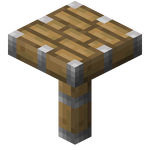 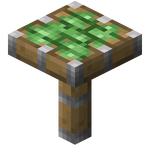 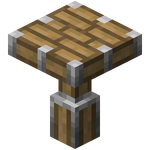 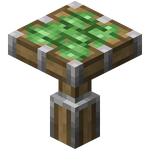 The piston head is a technical block used as the second block of an extended piston. A block state defines whether it is a normal or a sticky piston head. It can be placed using the /setblock command or with the debug stick, though if not part of a proper piston, it disappears after receiving any block tick, such as when a block is placed next to it unless the player uses the debug stick. It drops nothing.

The moving piston is an unobtainable technical block that contains part of a piston head, and/or part of one or two blocks that the piston is carrying into or out of the grid cell (including blocks carried indirectly via slime blocks). Since moving blocks vary in how much of each grid cell they occupy, they can't be stored as normal blocks and are instead stored as block entities. It is overwritten with air, the piston head or the carried block at the end of the piston stroke; but if it is placed through editing and no piston is connected, it remains indefinitely.

It is invisible and non-solid Πρότυπο:In, and cannot be broken without the use of commands or TNT. Although it is non-solid, fluids cannot pass through it. It also prevents players from building at its location. Mobs can see through it, but cannot walk through it. The game treats the block as a stone block when it comes to the player's footstep sounds. It is similar to Invisible Bedrock in properties with the exception that the player can walk through the moving piston but not invisible bedrock.

The moving piston has a block entity associated with it that holds additional data about the block.

The piston and sticky_piston blocks use following block states:

Issues relating to “Piston” are maintained on the issue tracker. Report issues there.