/moʊˈdʒæŋ/ ᴍᴏʜ-jang[1][2][3]) Studios, is a first-party game developer for Xbox Game Studios. It is primarily known for the creation and development of Minecraft. Located in multiple locations around the world, Mojang Studios has approximately 494 employees.[4] 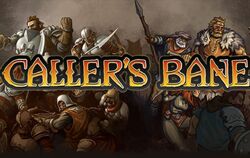 Cobalt is an action game developed by Oxeye Game Studios and published / co-developed by Mojang. Announced on August 16, 2011,[23] the gameplay consists of "running, jumping, rolling, shooting, throwing, dancing, hacking, rolling, flying, sliding, climbing, looting, deflecting, racing, piñata-ing, passing, scoring… and even more rolling!". The game also includes a map editor, and an engine that can be used to make new modes and games within it.

Cobalt is written in Lua, allowing for the game to be easily modifiable. The game was first made available through an alpha, starting from December 16, 2011, when it was offered at a discounted price.[24][25] On August 20, 2013, Cobalt was announced to be released on the Xbox 360 and Xbox One, with FatShark AB assisting with the port.[26]

Crown and Council is a casual strategy game fully created by Henrik Pettersson.[29] It was originally conceived in a 72-hour game jam, and was released on April 22, 2016. It was inspired by the games History of the World and Slay, although many compare it to Risk.

The game puts the player in control of a nation warring against others on a tile-based map. Each turn, the player earns income based on how many conquered tiles they have, and can spend earned money to conquer other tiles or improve their own through the construction of structures like forts, villages and universities, which all provide different bonuses. The player wins a map once they have vanquished all enemies, regardless of actual remaining neutral tiles.[30][31] There are 75 maps, with additional maps being procedurally generated.[32]

He originally said he planned on continuing working on the game to fix bugs and add features.[33] An update released in January 2017 added a 99-map campaign and tweaks to the procedural generation and land-taking mechanics to improve balance. The most important change was in the calculations affecting the attack and defense of territories: the element of "randomness" was removed, and "attrition" was added, meaning that failed attacks improve the chance of future attacks succeeding. This update also added OSX and Linux versions.[34]

Cobalt W.A.S.D. (short for Cobalt W.A.S.D. Aim Shoot Destroy) is an action video game developed by Oxeye Game Studios and co-developed / published by Mojang. Announced on June 1, 2017, it is a spin-off of Cobalt, focusing on the Team Deathmatch mode.[35]

The game was first made available in a closed beta the same day, and was originally planned to be released in August of that year. However, it was delayed to allow for more development time. The game was ultimately released for PC on November 30, 2017.[36]

Following the end to his involvement with Minecraft, Notch began pre-production of an alternate reality space game set in the distant future in March 2012. 0x10c is a hexadecimal number equivalent to 1612 in decimal, which equals 281,474,976,710,656, which was the number of years that were passed in story since 1988. On April Fools' Day 2012, Mojang launched a satirical website for Mars Effect, citing the lawsuit with Bethesda as an inspiration.[37] However, the gameplay elements remained true and on April 4, 2012, Mojang revealed it as a space sandbox title.[38]

The game was eventually put on hold in April of 2013 because Notch had found creative blocks. However, at the time, he was still interested in expanding the development staff to push the game toward release.[39] Eventually, the game was indefinitely shelved on August 13, 2013, but Notch added that it could be made in the future if another Mojang employee was interested in developing it.[40]

On September 15, 2014, the soundtrack for the game was released by Daniel Rosenfeld.[41]

From September 5, 2011[42] to July 19, 2012, Mojang was co-developing a video game tentatively titled Project Rex Kwon Do alongside an undisclosed developer. Before the title had reached a significant stage of development, Mojang cancelled the collaboration to focus on developing their own titles (Minecraft, Scrolls, and 0x10c at the time).[43]