< Mods
Επεξεργασία
The contents of this page are not supported by Mojang AB, the Minecraft Wiki, the Minecraft IRC channel or the Minecraft Forums.
This article may need cleanup to comply with the style guide.
Please help improve this if you can. The talk page may contain suggestions.
The Aether II

The Aether is a popular content mod which includes the Aether realm, the opposite of The Nether that includes several new blocks, mobs, and items, as well as a whole new accessory system. It has a wiki of its own, which will be far more up-to-date than the information here.

In order to install Aether II, you will need the following mods:

Alternatively, you can install the Aether II launcher which does all the mod installation and will automatically update the aether II for you.

If you are using forge run the Forge Installer. Download the Aether II and Guilded games utility for 1.6.4. Windows Vista and up: %APPDATA%/Roaming/.minecraft/bin/
Windows XP and below: %APPDATA%/.minecraft/bin/


To install The Aether II, copy aether.jar and threadedlighting.jar(OPTIONAL) into the mods folder.

If you are using the aether II launcher run the file launcher-start.jar. You will be asked for your mojang e-mail and password. Then press play. The aether II will begin downloading and then minecraft shall run with the aether installed.

The version history page provides easy access to information about recent changes and bug fixes for the different versions of the mod. Aether is in place of the sky realm.

The Greek word Αιθήρ, Aether, means "pure, fresh air" or "clear sky", imagined in mythology to be the pure essence where the gods lived and which they breathed.

The Aether is an amazing realm in the sky, as opposed to The Nether deep underground. It's main features are large floating islands and formations of Aeroclouds. There are many new mobs, items and blocks in the Aether, some being entirely different from those in the overworld, but few are similar to overworld mobs. To get to the Aether one must first make a nether portal formation out of glowstone, and place water with a water bucket at one the bottom corners. When you step through the portal for the first time your portal will spawn in a randomly generated Aether.

Normal overworld tools have extremely low efficiency in harvesting/mining blocks of the Aether, so even using your hands to harvest skyroot logs would be faster than using diamond tools. Normal torches and Fire cannot be used in the Aether, although water brought from the overworld works properly. So you are limited to only using Aether originated items/tools etc., much like starting in an entirely new overworld with nothing, as overworld tools are not so efficient. When a player falls off of an Aether island they will not fall into the void, instead they'll leave the Aether and be spawned high above of their original portal in the overworld and fall straight down, so one is advised to put water around their portal or they will die of fall damage, unless they fell too far away from their original Aether spawn, they'll fall far away from their overworld portal. Death from falling off the Aether can also be prevented by using Aether items/mobs that give the player the ability to not take fall damage. The Aether can be used to unreliably use fast travel through the overworld (much like the nether).

There are many "dungeons" (bronze, silver, gold) scattered across the Aether. Each contains bosses, special mobs and structures, after the boss(es) are defeated there is usually some special reward in a stone chest, that can only be opened with the key each boss drops after defeating.

There are many types of new ores and blocks in the Aether. Ores:

These items will be useful for your trip to the Aether, for all normal minecraft tool are weak in this world.

Tools: The tools are made with the same materials as the weapons. The Gravitite tools usually push back enemies and blocks, when they are sand or gravel, are pushed back. When TNT is ignited it will break rather than prime. The Altar is used to enchant the tools and weapons. The enchanted tools are generally more durable, and in the case of swords, more deadly. For armor, enchanting it generally makes it able to withstand more damage.

Mobs: Puff Clouds: which blow snowballs at you. And make whale sounds. Valkyrie: they spawn in front of you while you are in the gold dungeon. They are peaceful until you attack them. When attacking them they will use a sword which was already in their possession.(They are quite annoying seeing how they are constantly spawning in your face.) Mimic: these mobs are not challenging but first appear as normal chests inside the dungeons. They will transform from a chest to a chest mob when you are trying to take the treasures of the chest. Not all chests are hostile chest mobs but the ones that are only drop a chest when you kill them.

Dungeons in Aether are much more complex than in normal world. Each of them will have a boss which has to be defeated to get the key required to open the gray chest located inside the dungeon boss room. Blocks which make up the main structure of the dungeon cannot be destroyed or obtained until the boss of the dungeon is defeated.

The entrance of bronze dungeons are located on the sides of normal islands. Bronze dungeons can have a varying number of rooms. Non-boss rooms contain sentries which attack the player, and sometimes have chests on 4×4 tables. Some of these chests are mimics, however. The boss of this dungeon can't be attacked with a sword. It can, however, take damage from any tool (pickaxe, shovel, etc.). 9 blocks on the floor of each antechamber aren't minable at all. The boss room's walls are only minable once the boss is dead.

These dungeons are located within Parthenons in the sky. These have multiple floors, typically 3, each with multiple rooms. Most rooms have chests inside them, and while the majority of the chests are fake (Mimics), others contain some items. Silver dungeons are inhabited by Valkyries, which only attack when the player attacks them. When playing on Peaceful, Valkyries still appear, but will teleport away when you try to attack them. Killing a Valkyrie yields a single Victory Medal. The boss of this dungeon can only be attacked by presenting it with 10 of the medals, which can be done by right-clicking on it with the medals in hand. The Silver Dungeon boss can be attacked with any weapon. They are not currently Implemented into The Aether II.

Gold Dungeons are located within spherical islands with many Golden Oak trees growing on top of them. This dungeon usually only has the boss room in it, with no treasure/mob rooms beforehand. The boss cannot be killed by attacking it directly and must be killed by hitting the white object he throws back at it multiple times. Every time it is hit with the white object, it sends out a smaller version of itself to kill you. Once you kill the Sun Spirit, the sun will finally set in the Aether. Before you kill the Gold Boss, the sun will never go down. They Are not currently Implemented into the Aether II. 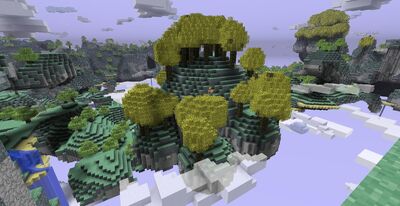 A Gold Dungeon Island from the Aether I.

Neutral mobs will not attack the player unless provoked. The act of provoking neutral mobs varies between mobs.

Hostile mobs will attack the player when in range, each with their own abilities.

Boss mobs have more complicated attack patterns and movements. They also have a large amount of health and may require special means to kill.

Compatibility with other mods[]

The Aether attempts to achieve maximum compatibility by existing libraries where possible. Because it uses Forge and PlayerAPI, it's only the main menu class that the Aether mod changes. Most mods which work with Forge will therefore be compatible with the Aether.