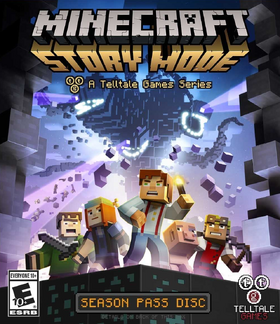 Minecraft: Story Mode is an episodic point-and-click narrative-driven graphic adventure video game based on the sandbox video game Minecraft, released in October 2015 across multiple platforms with a Windows 10 release on December 16, 2015, a Wii U release on January 21, 2016, a Apple TV release on August 24, 2016, and a Nintendo Switch release arriving at a later date.[16][17] The game was developed by Mojang AB, the developer of Minecraft, in collaboration with Telltale Games. Music for the game was composed by Anadel, an atmospheric folk band based in California.[18] The game follows the episodic format that Telltale has used for its previous titles, where player choices and actions have siginificant effects on later story elements.

Minecraft: Story Mode is an episodic point-and-click narrative-driven graphic adventure video game similar to Telltale's previous titles such as Tales from the Borderlands. The player is able to collect items, solve puzzles, and talk to non-player characters though conversation trees to learn about the story and determine what to do next. Like other Telltale Games, decisions that the player makes will have an impact on story elements in future episodes.[19] However, unlike Telltale's previous games that carry more mature or emotional overtones including the death of major characters, Story Mode is known as a family-friendly title, so the decisions are still pivotal and emotional but do not involve mature imagery or themes.[19] Elements of crafting and building, central to Minecraft, are included in the gameplay, following a similar approach.[19] The game features combat and other action sequences, carried out through both quick time events similar to Telltale's other episodic games, and more arcade-like controls, such as steering around debris on a road.[20][21] The game also mixes new characters with original themes to make an entirely original Minecraft experience.[22]

SPOILER WARNING
This section contains detailed information about the plot of Minecraft: Story Mode that may spoil your enjoyment of the game itself. Please proceed at your own risk.

Patton Oswalt as Jesse (male), a huge fan of everything going on in Minecraft, as well as the main character[23]
Catherine Taber as Jesse (female)[24]
Dee Bradley Baker as Reuben, Jesse's pet pig who is smart and funny.[25]
Brian Posehn as Axel, who is fiercely loyal to his friends, but can appear to act impulsive.[23][25]
Ashley Johnson as Petra, who is tough, shrewd, and very protective of her friends.[23][25]
Martha Plimpton as Olivia, who is assertive and smart, but lacks patience.[23][25]
Matthew Porter as Lukas, a member of the Ocelots who later befriends Jesse and his / her group.[26]

Order of the Stone members[]

David Fennoy as Gabriel the Warrior, a powerful warrior who appears at EnderCon[23]
Erin Oosbree as Ellegaard the Redstone Engineer, who is very smart, but whereabouts are slightly hazy[26]
Corey Feldman as Magnus the Rogue, who is hard to find but is also an impressive griefer who appreciates the "art" of it[26]
John Hodgman as Soren the Architect, who is the hardest to find and whereabouts have not been known for a while[26]
Paul Reubens as Ivor, a former member of the Order who distrusted Soren after the command block incident, and has vowed to demolish the world of Minecraft[26]

William West as the narrator, Siggie, and the fanboy[26]
Gina Keali'inohomoku Bowes as Maya, Ivy, and the fangirl
Phillip LaMarr as Gill, a member of the Ocelots, later known as the Blaze Rods.
Matthew Miller as Aiden, Otis, Schoolboy, TNT Dustin and Griefer #2
Jason Topolski as Usher, Disco Mickey, Griefer #5, PAMA, and Reuben
Erin Yvette as the announcer of the Endercon building competition, Mabel, Farmer Gloria and Griefer #1
Lydia Winters as herself
Owen Jones as himself
Ursula Taherian as Nohr
Samuel Riegel as Griefer #3
Michael Gambino as Calvin and Griefer #4
A.J. Riebli III as the announcer of the Death Bowl
Sean Astin as Reginald, the loyal Captain of the Guard[27]
James Meskimen as Milo, the leader of the Build Club.[27]
Melissa Hutchison as Isa, the Founder of Sky City[27]
Joseph Garrett as Stampy Cat[28]
Stacy Hinojosa as stacyplays[28]
Daniel Middleton as DanTDM (The Diamond Minecart)[28]
Elizabeth Dwyer as LDShadowLady[28]
Jordan Maron as CaptainSparklez[28]
Adam Harrington as TorqueDawg
Ashly Burch as Cassie Rose
Roger L. Jackson as the White Pumpkin
Yvette Nicole Brown as Harper, the creator of PAMA.[29]
James Cummings as Hadrian, the leader of the Old Builders.[1]
Kari Wahlgren as Mevia, the Enforcer.[1]
Jamie Alcroft as Otto
Audrey Wasilewski as Em
Julianne Buescher as Nell and Clutch
John Sanders as Facemeat
Christopher B. Duncan as Slab

The idea for Minecraft: Story Mode came around the end of 2012 when Telltale was engaged in work for Tales from the Borderlands, an episodic series based on the Borderlands series. The idea of developing stories around other established video game franchises led the team to brainstorm the idea for a Minecraft-related game, given that the game was essentially a "blank canvas" for storytelling, according to Job Stauffer, and would create an interesting challenge.[19] Telltale began negotiations with Mojang at GDC 2013, and began work on the title shortly thereafter.[19] Stauffer noted that Microsoft's acquisition of Mojang was not a factor in the game's development, as their interaction with Mojang began well before Microsoft's offers.[19]

Telltale opted to create a new main character of Jesse for Minecraft: Story Mode instead of using the default "Steve" and "Alex" characters from Minecraft, feeling that they did not want to attempt to rewrite how players already saw these characters in the game.[30] Other primary characters in the game are loosely designed around archetypes of common player-characters for Minecraft, such that those that engage in building, fighting, or griefing other players.[31] The game will not attempt to provide any background for some concepts in Minecraft, such as the creepers, as to avoid the various interpretations that fans have done for these elements, though they will be elements of the game's story.[31]

Stauffer stated that the game's story would be aimed as family-friendly, similar to The Goonies or Ghostbusters;[19] their intended content would be equivalent to a PG-13 or PEGI-12 rating.[31] A number of the voice actors are alumni of such films of the 1980s such as Corey Feldman who starred in The Goonies, and the game includes various references to these types of films.[31] Stauffer reflected that while Telltale's more recent games like The Walking Dead were more mature stories, their original adventure games like Sam & Max and Strong Bad's Cool Game for Attractive People were written as family-friendly, and that they consider their approach to Story Mode as "part of our DNA". The story was aimed to be accessible to both existing players of Minecraft - both novice and advanced players - and to new audiences outside of the game.[19]

Minecraft: Story Mode was formally announced in December 2014 as a collaboration project between Mojang and Telltale Games; the announcement was presented as an interactive adventure game named "Info Quest II".[32] Its first trailer was released during the Minecon convention in early July 2015. Telltale has confirmed that they will release the game for the Wii U, representing the first time a Minecraft game has been released on a Nintendo platform.[19]

On August 24, 2015, Winters posted on Twitter that she had completed voiceover work for the game, but didn't specify if she voiced a character or did some narration for the game.[33]

On August 28, 2015, it was announced that the player will be able to choose the appearance of the main character, Jesse.[24]

On October 7, 2015, Anadel, an atmospheric folk band based in Napa, California, announced that they had composed the music for the game.[34]

On March 22, 2016, Telltale Games announced that three episodes will be available throughout 2016 as downloadable content.[27] These episodes will not be available under the season pass, and as such, must be purchased separately.[37] In order to download these episodes, you must have at least one episode from the main series.[27] Although these episodes are not part of the actual game, Telltale has officially marked them as episode 6, 7, and 8, respectively.[27]

Episode 1 - The Order of the Stone Trailer[]

Episode 4 - A Block and a Hard Place Trailer[]

Episode 6 - A Portal to Mystery Trailer[]

Episode 1: The Order of the Stone[]

Episode 3: The Last Place You Look[]

Episode 4: A Block and a Hard Place[]

Episode 6: A Portal to Mystery[]