Επεξεργασία
This article is a stub.
Please help us by expanding it.
Jon Kågström 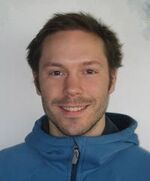 Jon Kågström is the AI Programmer for Minecraft. He was hired for Mojang on December 28, 2011, having previously worked on enemy AI for Battlefield. He has helped Mojang create new "smart" AI for the mobs in Minecraft. He played an active role alongside Jeb in developing Minecraft features, fixes, and improvements for the 1.2 update. Currently, he is working on Scrolls, although he will return to work on Minecraft at an unknown later date.