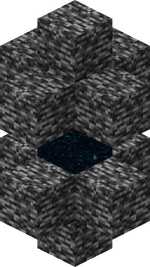 This article is about the portal created after defeating the Ender Dragon. For the block that provides the teleportation mechanism, see End Gateway (block). For the portal used to gain access to or to exit the end, see End Portal.

End gateway portals are generated in the End after defeating the ender dragon, and are used to gain quick access to the outer End islands.

A new end gateway portal generates near the edge of the main island each time the ender dragon is defeated. A maximum of twenty portals can be generated for each world, arranged in a circular fashion around the island at Y-level 75, approximately 70 to 100 blocks away from the center (0,0). Killing the ender dragon after twenty portals are generated will not generate further portals.

An additional end gateway portal will generate in the outer End regions after activating one at the main island. These gateways generate at Y-level 66 to 69. If there are no blocks within a five-block radius from the gateway below these Y-coordinates however, then it generates above the usual level until there is a block below the structure within the radius. The exact X-Z position where the gateway generates in the outer islands is random, but it is always within ~1000 blocks from the center and relative to the X-Z coordinates of the first gateway portal and (0,0).

They also generate randomly among the outer islands. These teleport the player back to the location of the original obsidian platform at the central island, though it does not regenerate the platform.

The end gateway portal is composed of an end gateway block confined within a small formation made up of twelve bedrocks.

A purple beam shoots out vertically from the top and bottom of the gateway portal when generated, which disappears after about 5 seconds. When an entity enters the gateway, it emits a purple beam momentarily.

Once teleported, another end gateway portal generates near where the player landed in the outer end islands; this portal teleports the player back to the original gateway portal, providing a way to return to the main island.

The position that the player or entity lands after teleporting is based on an systematic algorithm; the gateway searches for a non-transparent block starting from the north-west corner at the topmost height (Y=255) within a 5 block radius around the gateway portal block. If there is a block at that position, then the entity is teleported on that block. If there is no block, then the next position along the Z-axis is searched (shown as the lapis lazuli block on right). This continues along each column in an 11 × 11 area at the same Y-level with the exception of blocks above, below, or directly adjacent (including diagonals) to the portal block. If there are no blocks, it moves one Y-level down and repeats the sequence from the north-west corner again. It will continue doing this until every height is checked, and if there are no non-transparent blocks within any of these points it will always teleport the entity exactly two blocks above the gateway portal block.

Issues relating to “End gateway portal” are maintained on the issue tracker. Report issues there.