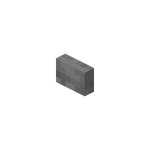 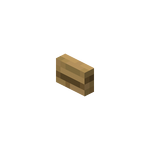 A button is a non-solid block which can provide temporary redstone power.

A button will also be removed and drop itself as an item:

A button will be destroyed without dropping itself as an item if lava flows into its space.

Buttons can be crafted from stone for a stone button, or wood planks for a wooden button.

Stone buttons are naturally generated in strongholds, next to iron doors.

A button can be used as a monostable power source (it will automatically deactivate shortly after being activated).

To place a button, use the "Use Item/Place Block" control (right-click, by default) while aiming at the surface to which it should be attached.

A button can be attached to the side, bottom and top of any full solid opaque block (stone, dirt, blocks of gold, etc.).

Buttons are usually in an inactive state, but can be temporarily activated by players. To activate a placed button, use the "Use Item/Place Block" control (right-click, by default). A wooden button can also be activated by a fired arrow.

While active, a button:

Wooden buttons can be used as a fuel in furnaces, smelting 0.5 items per button.[Computer edition only]

A button's type is defined by its ID name, and its orientation and activation status is stored in its block data. A button also has a block state which is expected to replace the functionality of block data in a future version.

A button's ID defines what type of button it is.

A button's block data stores its orientation, and whether it is active:

Issues relating to “Button” are maintained on the issue tracker. Report issues there.