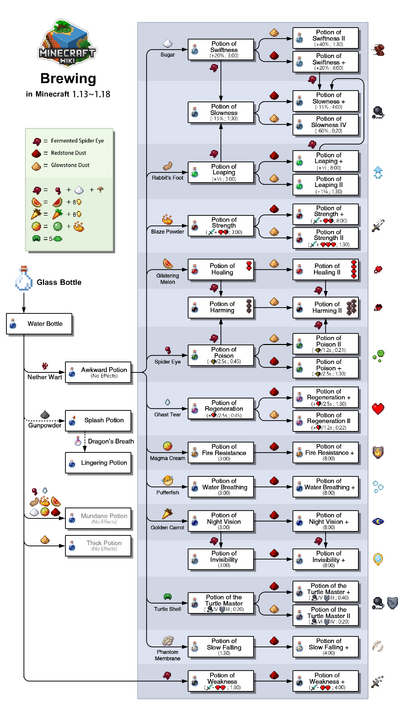 Brewing is the process of creating potions, splash potions and lingering potions by adding various ingredients to water bottles in a brewing stand.

By placing one or more bottles in the lower three slots of the brewing interface, an ingredient in the upper slot, and blaze powder in the fuel slot,[Computer and Console editions] you can distill the ingredient into each bottle and brew potions which may be consumed to grant an effect to the player.

Every potion starts with a water bottle, made by filling a glass bottle at a water source or filled cauldron. Using blaze powder,[Computer and Console editions] the next step is to add a primary ingredient to create a base potion, which is usually Nether Wart, which creates an awkward potion and has no effects. By brewing a second ingredient into a base potion in the same manner, you can create a potion with a working effect. A third ingredient may be added to make the effect more intense or last longer, or turn the effect harmful. Gunpowder can be added to a potion at any stage to convert it to a splash potion, which can be thrown (or fired using a dispenser) to disperse its effect in a radius. Finally, dragon's breath can be added to a splash potion to convert it to a lingering potion, which can be used to disperse its effect in a bubble. Each brewing step takes 20 seconds.

Each blaze powder used as fuel[Computer and Console editions] provides 20 fuel points. It costs 1 fuel point to start brewing one ingredient; this fuel point is not recovered if the brewing is halted due to removing the ingredient or the potions being brewed into.

Note: The video is outdated; it does not mention the potions of Invisibility, Leaping, Night Vision or Water Breathing or their ingredients. Also the brewing stand now requires Blaze Powder in the computer and console editions.

Base ingredients are the starting point of all potions. Nether Wart is the primary ingredient added to water bottles at this stage, as it is required to make most of the potions. Fermented Spider Eye allows making a Potion of Weakness. All other base ingredients do not allow making anything useful.

Secondary ingredients imbue an Awkward Potion with a particular effect but do not alter potion duration or intensity. When added directly to a water bottle, any of these ingredients will produce a Mundane Potion (with the exception the golden carrot, which can't be brewed into a water bottle to make a potion).

Modifiers change the potion's properties. The "longer duration" and "more potent" versions of a potion can be forever interchanged.

Corrupting Effect: Fermented Spider Eyes will change a potion's base effect, often reversing it or producing a negative potion.

All primary potions are created by brewing a single ingredient with a water bottle. All potions can be combined with gunpowder to create splash potions.

Secondary potions are created by brewing an ingredient with a primary potion and can be combined with gunpowder to create their throwable splash potion counterparts.

Tertiary potions are created by brewing an ingredient with a secondary potion or another tertiary potion and can be combined with gunpowder to create their throwable splash potion counterparts.

The following are the most efficient recipes to brew each potion. If two ingredients may be brewed in any order relative to each other, they are separated by a double arrow (↔).

The Potion of Luck[Computer and Console editions] and the Potion of Decay[Pocket edition only] cannot be brewed, and can only be obtained by commands such as /give @p minecraft:potion 1 0 {Potion:luck}, or through the creative inventory.

Based on information found in minecraft.jar/lang/en_US.lang, the current potion types are listed below:

Due to changes in the brewing system, the following potions are currently not accessible:

Some potions also do not have a real name in minecraft (i.e. Potion of potion.healthBoost.postFix) and are currently not accessible