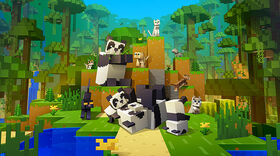 1.8.0 is a major update to Bedrock Edition released on December 11, 2018.[1] It adds some of the features from the Village & Pillage update, including pandas, bamboo, scaffolding, crossbows, and cats as a separate mob from ocelots.[2]