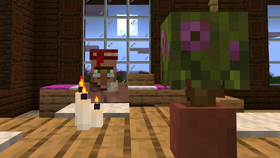 1.17.10 is an minor update to Bedrock Edition released on July 13, 2021, which added Kerzen, brought additional parity with Java Edition, experimental features for 1.18.0 and fixed bugs.[1]

Development phases contain some of the Caves & Cliffs: Part II features through experimental gameplay, which will not be included in the full release but will be part of 1.18.0.